The Town Mayor's Serjant and Crier of Wimborne Minster 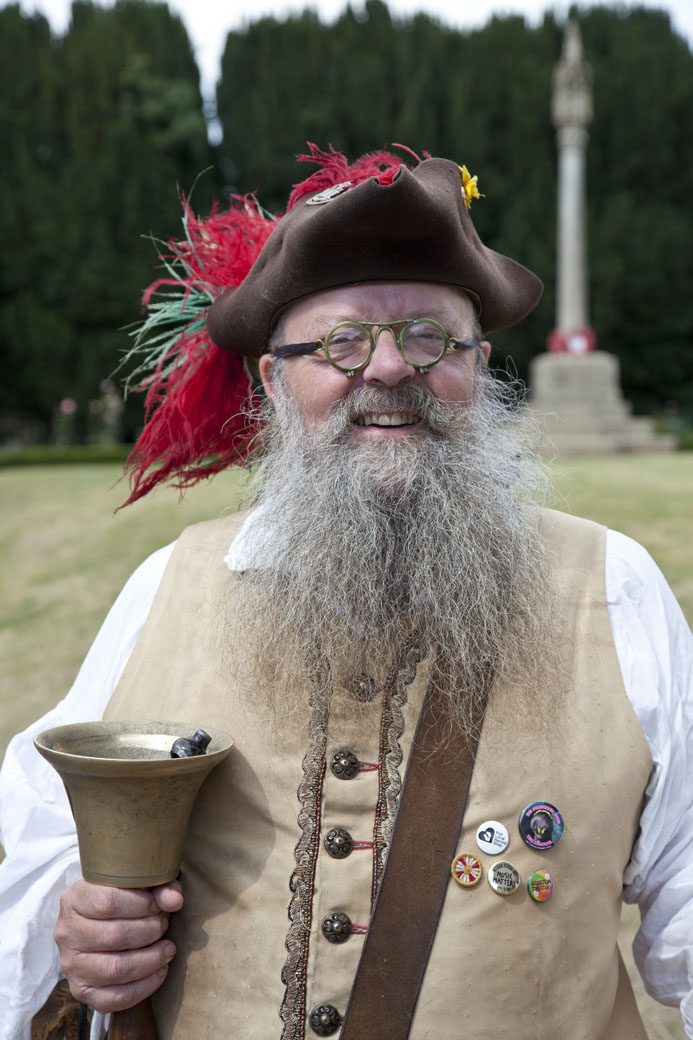 The Role in Wimborne Minster

The Town Mayor’s Serjant is an ancient role which was revived in 1998 to appoint Chris Brown to assist in the Town’s civic functions and duties. The role is an ancient one that in times past would have had the authority similar to the modern-day Police. The incumbent was also used to collect taxes from markets and impound stray animals and keep good order in the Town. At the time of Chris’s appointment Mike Andrews was the Town Crier and Chris was also appointed to Deputy Town Crier and when Mike moved on to become Town Crier of Ferndown Chris assumed the Town Crier role. Shortly after this Melvin Gudger was appointed to be Deputy Town Crier.

The Serjant receives a commission every year from the incoming Mayor to raise The Wimborne Militia to assist in protecting the Mayor, the Council and the Town from disorder and rebellion! This dates back to ancient times where each County was tasked to raise an armed body to defend the nation from attack or quell rebellion. This task would fall upon local Lords of The Manor and later County Lieutenants or Sheriffs and was further delegated to local Lords of The Manor. Each town would be tasked to raise their own body to be sent to the County Militia and in Wimborne we have recreated the body that was summoned to repel the Duke of Monmouth who landed in Lyme Regis in 1685. For more information on the Militia see The Wimborne Militia page on this site.

Over the years a tradition has become established that The Serjant and The Militia will escort the outgoing Mayor and his chains of office to the Town Hall in procession. The outgoing Mayor will be encouraged to thank them for their loyal service over the past year by treating them to a drink. Similarly the new incoming Mayor will be escorted following the handing over of the Mayoral Office and is expected to buy them a drink to cement their loyalty for the coming year. 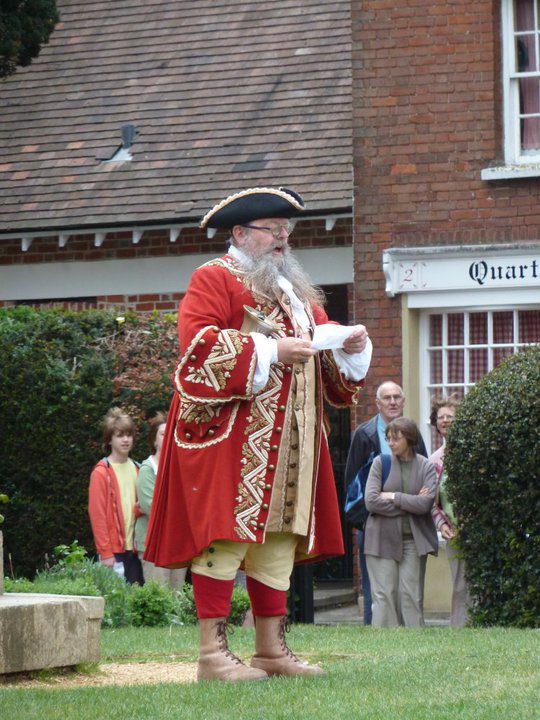 When the Town Mayor attends a a formal Civic function within the town such as the annual Civic Service, a National Celebration and Remembrance events the Serjant (if available) will also attend as would the Town Militia as the formal bodyguard of the office. For more informal events request for attendance should be discussed with the Mayor’s Secretary at the earliest opportunity.

The Serjant & Crier, if given enough notice is happy to make announcements and deliver a “cry” at events and celebrations that promote the town, shops, businesses, community events and people’s personal celebrations. If this is a commercial event than it might be appropriate for a donation to be made to the Mayor’s Charity Fund, again please contact the Mayor’s Secretary at the earliest opportunity.

Chris is also available to give talks to groups about his role entitled “My Life as a Town Crier” which is a light-hearted and amusing resume of what he got caught up in.

There were “Town Pounds” for stray animals at each point of entry to the town where they would be held by the Serjant & Crier. If you could prove one of these was your property a fine would be levied to release it at the rate of one penny for each turn of the key so the charge would have been a minimum of four pence to release each animal.

Chris was judged The Ancient and Honourable Guild of Town Criers Champion in 2007 and has been Dorset County Champion Crier on five occasions. Chris is a Trustee of Walford Mill Education Trust, further information can be found here: www.walfordmill.org

The Southern England Town Crier Championship is held every other year (previously alternating with the Blandford Georgian Fair) on the first May Bank Holiday Monday in Wimborne and is hosted by Chris Brown and Melvin Gudger (Deputy Town Crier & Serjant of Musket). As organisers they are not allowed to enter as they appoint the judges drawn from local people. The competition, which is free to view and attracts good crowds, traditionally takes place over two rounds on the Town Square and there are prizes for Champion, Runner up and Second Runner Up as well as Best Dressed Town Crier, Best Dressed Escort and Best Dressed Couple.

Chris is aiming to host the Dorset County Championship in 2020, known as “The Stanley Mansbridge Perpetual Trophy” as he won the title in 2019 the previous year. The rule being that no crier can win it two years running so that the trophy moves around the County and is hosted by the previous year’s winner. In 2015 the competition was held in Wimborne on November 28th as part of the Town celebrations for switching on of the Christmas lights. Chris won this again in 2019 so will be hosting it in 2020 again.

in April 2018 Chris was made an Honorary Freeman of Wimborne Minster for his services to the town, being only the forth person to be granted this title.

Chris is also known as DJ DAPPER DAN and produces a weekly radio show SKANKING DELIGHTS which goes out on Radio Wimborne, KeeP106 and Forest FM. Past shows can be listened to on Mixcloud.