CHARITIES FAIR RAISES OVER £3,000 FOR CHARITY

19 Local Charities and Organisations, manning 30 tables took part in the Grand Charities Fair organised by Wimborne in Bloom and held in the Allendale Centre, Wimborne Minster on Saturday 12th November 2022. Between them they raised over £3,000 for the various causes they represented. Stalls included those raising money for the Royal National Lifeboat Institution, High Mead Farm, Little Angels Knitting Group and Forest Holme Hospice.

Wimborne in Bloom also had a successful table with three Hampers as prizes.

Entrance was free, courtesy of Wimborne in Bloom, but the public generously donated over £170 on the door.

The Fair was opened by Cllr Carol Butter, the Town Mayor supported by Chris Brown, Town Crier and Town Mayor’s Serjant. For the second year in succession it was a fine sunny day and this probably helped to encourage the attendance of 600. We hope that the Fair gave the various Charities and Organisations represented an opportunity to sell their wares and publicise themselves especially ahead of the Christmas Season.

Richard Nunn, Chairman of Wimborne in Bloom and on behalf of the Committee thanked the various Charities for taking part. He also expressed thanks to the Public for their support and the Allendale Centre for all their help.

The event was once again a success and a climax to our 30th anniversary which falls on 27th November.

Wimborne in Bloom will be showing their flag again at the Save the Children Parade through Wimborne on Saturday 10th December and then the first event of the New Year will be the Annual Wine and Wisdom Fun Quiz Evening. This will take place on Friday 3rd March 2023 in the Allendale Centre when teams of six will pit their wits against each other to try and win the coveted Eco-Composting Shield.

Next year’s Charities Fair has also been booked for Saturday 11th November.

Full details of all our events can be seen on our website; www.wimborneinbloom.org.uk

Rosemary Dunning, who was on the Children’s Society Stall, receives the second prize hamper from John Allen who coordinated the Fair on behalf of Wimborne in Bloom. Looking on is Rosemary’s husband and Wimborne in Bloom Committee Members Chris and Jean Hooker

The Town Mayor Cllr Carol Butter and the Town Crier Chris Brown visit the Wimborne in Bloom table with its hampers as prizes.

An overview of  the stalls and the visiting  Public 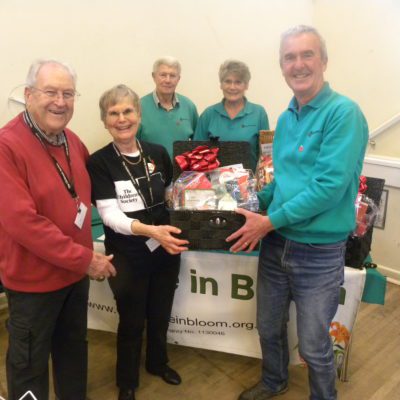